The German artist returns to Venice with an exhibition at the Doge’s Palace.

Anselm Kiefer, one of the most important German artists on the world stage today, returns to Venice with a site-specific exhibition at the Doge's Palace: Questi scritti, quando verranno bruciati, daranno finalmente un po’ di luce (Andrea Emo) (‘These words, when burned, will finally shed some light’). The event takes its name from some of Andrea Emo's writings: the German artist notes deep connections between his own artistic method and the thinking of the Venetian philosopher. 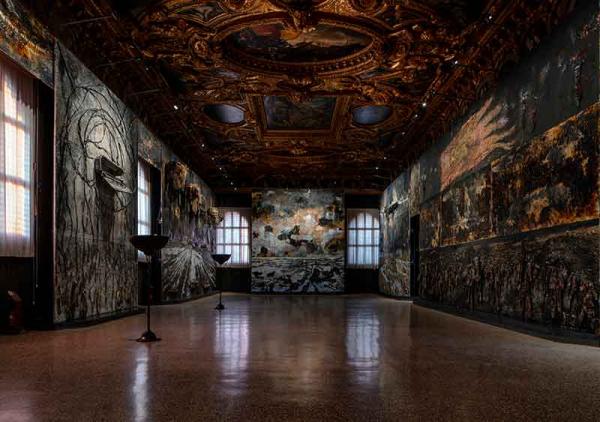 The exhibition, strongly supported by the director of the Musei Civici di Venezia, Gabriella Belli, is hosted in the extraordinary spaces of the Sala dello Scrutinio and the Sala della Quarantia Nova in the Doge’s Palace. Kiefer's large-scale works on display here reflect on the specificity of Venice and its position: in contact with Eastern and Western cultures, in a unique and particular fusion.

In the words of director Belli: "The purpose of this great work is to understand how much need we have in public spaces today to bear witness to our time, to construct an epiphany of our contemporary era, to ‘stage’ the present and our universal values".

To understand better the development of this exceptional event, we publish an extract from the long letter that the artist wrote to Gabriella Belli, taken from the exhibition catalogue. 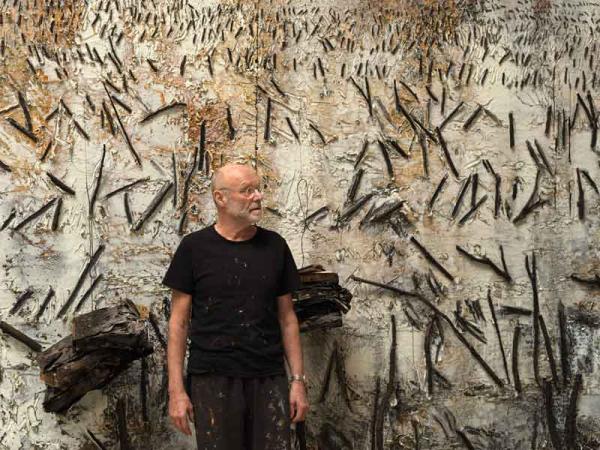 Dear Gabriella, you have seen all the paintings I have created so far for the Palazzo Ducale. There are more than the space could accommodate and now we have to make a choice, a choice that can only be a temporary one—perhaps maybe in a week or a month or a year we would make a completely different choice.

And no one can prevent me from sinking all the pictures into the lagoon after the exhibition and waiting to see what the future, the epitome of everything possible, will bring.

And precisely because we might then think that the images are not so uninteresting that we could value them, we trust in their future in the lagoon. For every being as one that will become strives to become another. Being is the same as nothingness, which it presupposes as its foundation.

The future is present and absent at the same time. 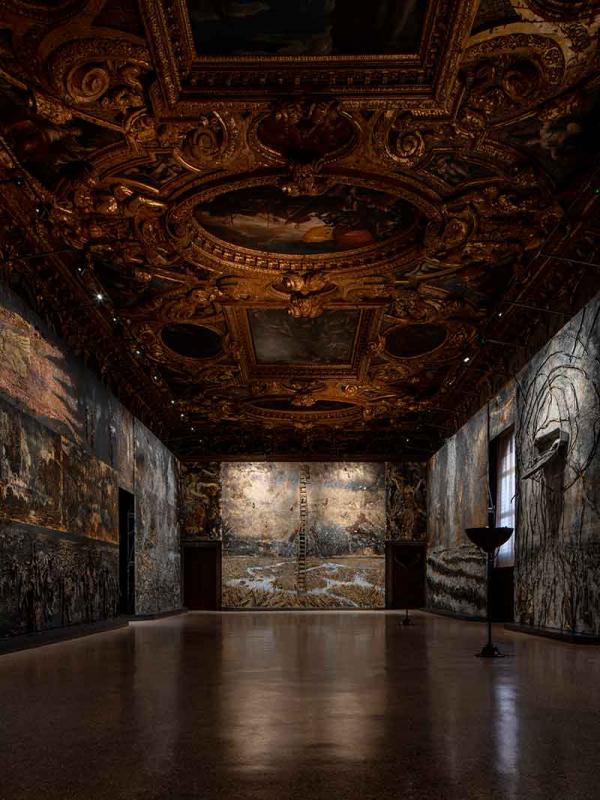 As concerns the pictures, I toy with history. With Andrea Emo I have found confirmation that history is a chain of illogical, ahistorical actions, incidents that have nothing to do with cause and effect. Each event is a step forward against the law of necessity. However, I toy with both historical time and geological time. There’s the painting with the continents: that’s geological time; see Alfred Wegener’s Continental Drift Theory. Then there’s the painting with the uniforms: historical time, the power of the Serenissima on the terra firma, as well as the painting with the submarines: the power of Venice on the seas. Whereby I maintain that the Venetians already had submarines.

The painting with the coffin containing the body of Saint Mark refers to human time. Inside the coffin is a small sack with the relics. Even more important relics come to mind, for example, the nails from the cross that Jesus Christ was nailed to. Andrea Emo is certain that Christ really did die on the cross. He sees the resurrection in the cross itself and not afterwards. For God exists in his self- destruction. He “de-activates” himself.

You’ll see: the new space I’ve created is an overlapping of all possible ideas, philosophies from the North, from the South, from the Orient as well as from the Occident. 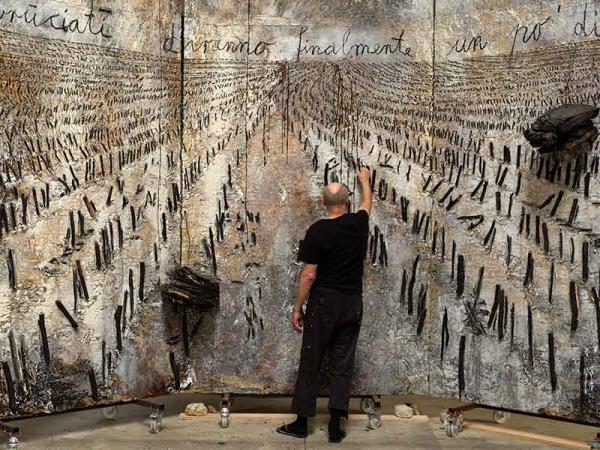 But there are also direct, childishly ironic interjections, for instance, the image with the shopping carts, each of which assigned to a Doge with a zinc name tag.
I could go on, introducing you to the images with all kinds of associative explanations. But I had better stop there, because the observer should make up their own mind, always remembering that what is there is only the complete, real presence of Nothingness.