Markets are a synthesis of our territories, products, trades, biodiversities and culture

The reason why people all over the world love markets is simple and understandable: markets are one of the most pleasant, immediate and universal syntheses of our territories, products, trades, biodiversity and culture, and not merely in terms of just food and wine. 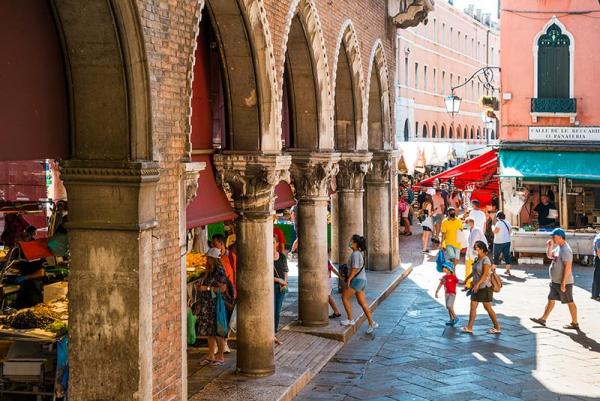 This is why anyone asking a Venetian what the Rialto market represents for them and their family would be pleasantly informed of a sense of belonging, memories, emotions, anecdotes, sometimes disappointments, but above all hopes.

Imagining therefore that Rialto become a collective and shared project with which to measure our ability to regenerate a vision of the city for current and future generations is necessary and inevitable.

The easily observable novelty concerns the signals of invigoration regarding the subject of reviving Rialto from various quarters: it is important to stress the flourishing of debates and initiatives on the subject, the only limitation of which is that they are not (yet) being coordinated. Important studies show that Europe's most lived-in and famous markets have their social and economic success precisely in their associative capacity and management model. 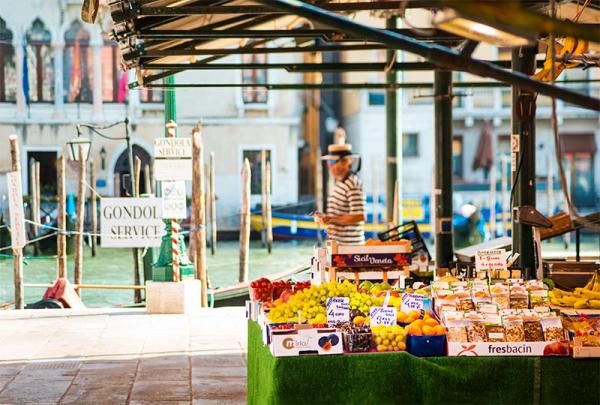 The associations made up of committees govern the organisational, tendering, logistical and economic aspects, but also the social ones: cookery schools for adults and children; the market kitchen, where chefs propose original and innovative recipes based on the products on sale; local producers who supply the market stalls by promoting the local food and wine heritage; and so on.

These and other ideas already strike a common chord with many of Venice's protagonists, including independent operators – from current and new generations – restaurateurs and chefs of varying degrees of celebrity, associations such as Coldiretti and the Parco Alimentare del Veneto Orientale, the new generation of producers of lagoon crops, as well as food bloggers, ethnobotanists, creative people, young entrepreneurs and ordinary citizens. 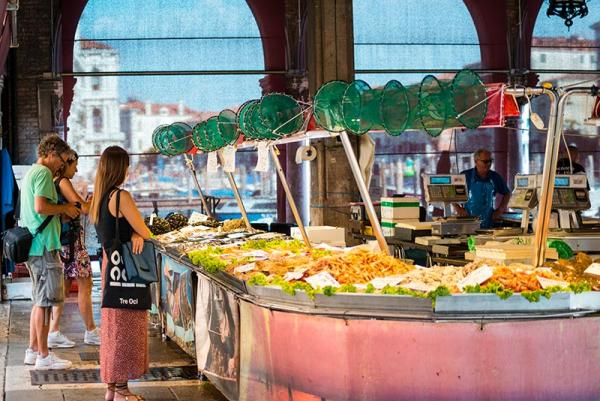 These people constitute the human capital that encourages new visions, and listening to them in a future assembly which is to be hoped might take place (and which could perhaps become a single association in the future) would make it possible to realise the market in a sustainable and lasting social and economic perspective. The words below are dedicated to some of the people we met, to their stories and ideas.

Among them is Francesco, an aspiring ship’s captain, who began his career in the world of shipping. However, after a few years at sea, he discovered his true passion, cooking, and started working in his family's restaurant.

Francesco's link with the Rialto market dates back to the 1940s and 1950s – years in which his grandfather had a fish stall – and continues to this day, as he buys the raw materials for his restaurant exclusively from it. 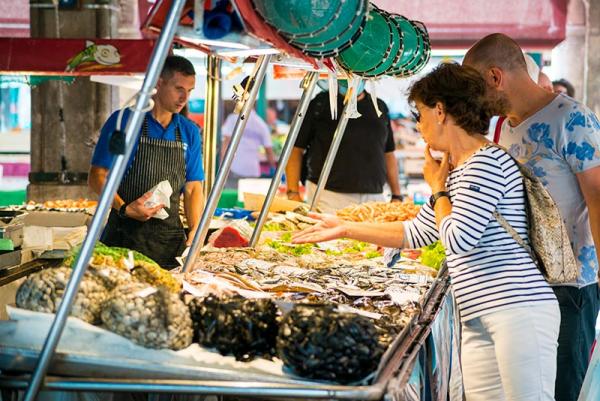 Together with colleagues from the Associazione dei Ristoranti della Buona Accoglienza in Venice, he is currently finalising a rental contract for two hectares of land on Sant'Erasmo, so that he can start growing and then use biodynamically grown fruit and vegetables in his restaurants. Francesco dreams of creating a permanent cooking workshop that will enhance the both products sold at the market and Venetian cuisine, collaborating not only with the region's hotel schools but also with the most important cooking schools in Italy. His ambition is one day to establish a form of twinning with the most important markets in Europe. For the regeneration of the Rialto market, he suggests working in synergy with the city's productive and non-productive realities (restaurateurs, schools, tourist guides, etc.) that love Venice and aim for sustainable and quality tourism, involving some of his restaurateur colleagues on the way. 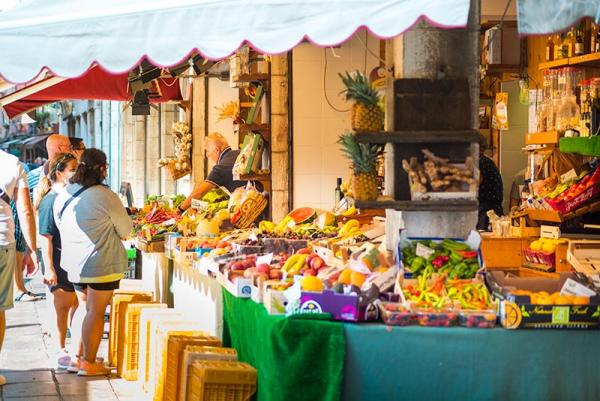 Nicola, on the other hand, began his journey in Padua, in his family's delicatessen-gastronomy shop, where he sold truffles, caviar, great wines and quality food for the Veneto catering industry. In 2016 he decided to open a delicatessen in Venice, to enhance Italian produce in a city that was falling into the hands of the international market (Asian and others). Here he offers Italian food and excellence, many SlowFood presidia, cured meats, cheeses, gastronomy and wine.

‘In future, I would like to continue to disseminate my experience with commercial activities within the market, providing training and proposing new events and initiatives. Without changing the market's habits, it would be a matter of allocating more stalls to direct producers of vegetables and cheeses from our area, who could display their products for a couple of days a week. I would also like to see a cookery school where chefs could be joined by producers of wine, cured meats and cheeses, and have room in the market for people like Mascari, a great connoisseur of spices, displayed in his unique and historic shop, or like Mamma Sandra of Cantinone Schiavi, who is a great expert in Venetian cicchetti, about which she has written a book, and who has received many awards for the quality of her food pairings’. 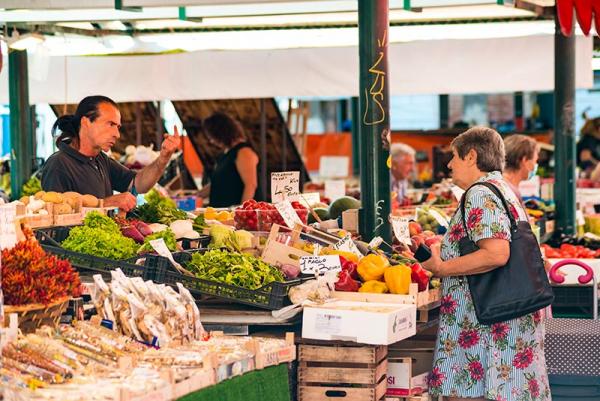 Gabriele's adventure in the restaurant business began with his family, immediately after graduating from the Andrea Barbarigo hotel school in Venice. His idea was to bring back ‘the cuisine of the past’ to the streets, squares and houses of Venice. ‘The one that recalls the scents, tastes, memories of when I was younger and cooked with my grandparents’, without forgetting the tradition, the origins and the way food was served to ‘take away’: namely, on a scartosso, a ‘scrap’ (once of newspaper, now made of bamboo).  In July 2013 he opened a restaurant in Campiello dei Meloni, not far from the Rialto: ‘I started this adventure from scratch, offering the foundations of Venetian cuisine: meatballs, baccalà, sarde in saor, folpi, cuttlefish but above all the scartosso fritto de pesse'. Today these dishes have been joined by other typical products presented in a modern form, made with ingredients purchased strictly at the Rialto market, and in particular the fish and vegetables, which are processed and transformed in our kitchen and from February 2019 also in a new production workshop in Calle della Malvasia. ‘Since then, we have welcomed young men and women from the same hotel school that trained me, who have been added to the staff and educated to respect the raw material and the work, but above all cooking understood as a passion, because otherwise it remains just a job’.

This is why people love markets and why the regeneration of the market and the island of Rialto is such an intensely significant project for the future of Venice and its lagoon.

Paolo Lucchetta, architect, graduated in Venice with Aldo Rossi. Since 1999 he has directed RetailDesign srl, a multidisciplinary research and project laboratory dedicated to social and commercial architecture.
Many of his projects have won prizes and awards, including the Mercato Coperto (indoor market) in Ravenna and the Metropolitan Market in Mayfair. He also designs spaces dedicated to publishing, fashion and design. In Venice he has designed the bookshops of the Gallerie dell'Accademia, the Scuola Grande di San Rocco and the M9 Museum.