It was decided in this exhibition to follow the visual story of the Annunciation and its implied meanings and symbologies in an intense and syncopated rhythm within a concentrated chronology. 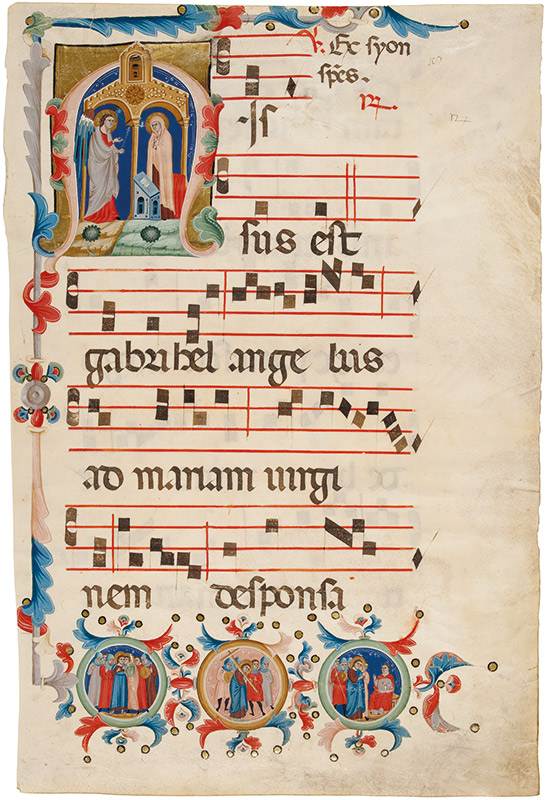 The Annunciation is a central theme in a continuity that crosses every century and model of faith, to take on a value that surpasses every liturgy and becomes pure symbol of incarnation and maternity.

The opening of the exhibition is dedicated to the messenger and his symbology with the sculpture by Giambologna, from the collections of the Galleria Franchetti at Ca’ d’Oro, Venice. And the word written by one of the most representative artists of the avant-garde last century, Lucio Fontana, is fixed on laity, not without a second meaning. I am (not) a saint he wrote, almost asking for space among the first of those that were to become his very famous Cuts.

The Annunciation is also opposition: the end, the unfolding of the story, is already implied in the extraordinary nature of the news. 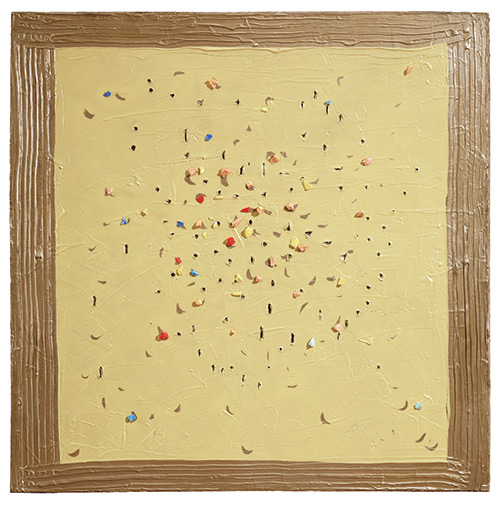 Indeed, the Annunciation illuminated by the Second Master of San Domenico from the Fondazione Cini seems to refer to this simultaneity of events. The portrayal of the Annunciation, the architecture that becomes the initial letter M and the writing coexist on the page of the antiphon, with three scenes from Christ’s Passion at its foot. So the Marian anthology unfolds through a multitude of ‘dedications’ and representations. The chanting of the antiphons and the patient, almost surreal mastery of the expert hands of the illuminator of the golden books are dedicated to it.

In the same way as the sixteenth-century private altar with its quiet splendour, or even more, that anonymous Greek-Veneto painter from the Museo Correr, the Annunciation is the apical part of the story that also includes, in summa, the Crucifixion, through to the announcing angels, fiery ivories of clouds and lights, or plunges into the prec 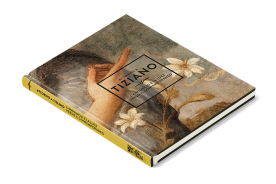 iousness of prayer books, rosaries and lauds in honour of Mary. And yet this story becomes earthly. The doge visits the Scuola di San Rocco, as Borsato shows us. A stop on the stairway of honour. At the top is Titian’s Annunciation. This artist’s unattainable song is the hinge and summit of the pathway. The wonders are read in the features of the Virgin, but she is ready, immersed in the light and in the tormenting and symbolic domestic humility consigned to the still life of the basket; everyday and symbolic objects that well describe, alongside, the cabinet packed with wonders in Garofalo’s painting.

The prints sing of this splendid, womanly world, through to the countermelody among matter, times and modes in the bas-relief by Antonio Canova with the Teatrino by Lucio Fontana. 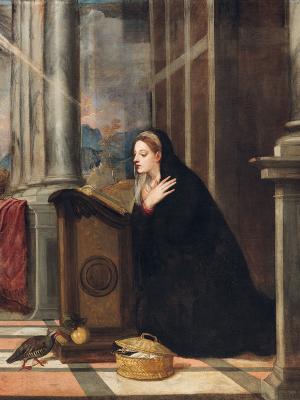 And the part that follows from this white diptych is mainly dedicated to the mystical light, at the same time an element of the everyday. The explosion of yellow light in Sun in St Mark’s square by the spatialist master is of his Venice.

The works by Liz Larner, Barry X Ball, Arthur Duff and Aldo Grazzi seem to introduce us to the secret of light. The modern angel by Luigi Ontani, who portrays an angel met precisely in the memory of ancient painting with modesty and surprise. The sign of Previati that announces, warns of, the splendour of the colours of Flavin’s neons, plunges into the frightening and noted picture of the crosses.