A manifesto of faith and art. The Scuola Grande di San Marco is the monumental entrance to Venice Public Hospital. Its restoration has returned spaces to the city that were for long inaccessible. They declare the meaning and continuity of an ancient mission.

The gaze must have lingered on the majestic facade for some time. If the sky was clear that day in March 1500, it would have stood out in the light.

Leonardo da Vinci arrived in Venice at the age of almost fifty, on his way back from his Last Supper project in Milan. He was eager to see the marvel of power and balance of the equestrian monument to Colleoni in Campo Santi Giovanni e Paolo. It had been conceived by Andrea del Verrocchio, his teacher. But the Tuscan Leonardo did not expect such a spectacular background for the soldier’s parade. Verrocchio was dead. Alessandro Leopardi had cast the horse and rider in 1496.

The stone scenario of the Scuola Grande di San Marco had been completed only a year before. It marks a Venetian Renaissance different from that of Florence. There is the painting lesson of the Paduan Mantegna in the illusionism of the perspective lines beside the two accesses: they frame, in pairs, lions and episodes from the life of the evangelist, patron of Venice. The exotic crowning surmounts classical architectural modules and Byzantine geometries.

A fine combination, because only in this way, with splendour and rhythm, would the building not have been overwhelmed by the still Gothic edifice of the Dominican Brothers’ basilica with which it forms a right angle.

It is the surprisingly compact result of a group project, developed over a decade by Pietro Lombardo with his son Tullio, Giovanni Buora and Mauro Codussi, who conceived the pediment and internal staircase. 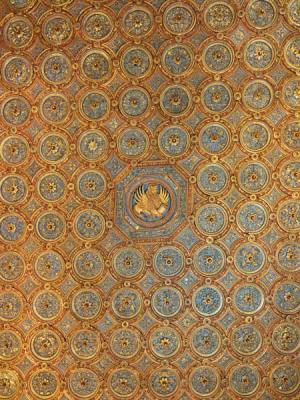 The fire that destroyed the previous building, in 1485, did not damage all of the reliefs by Bartolomeo Bon. The precious Porta della Carta in the Doge’s Palace is his.

The surviving sculptures were arranged on the new facade. The brothers kneel before Mark their protector in the lunette of the main doorway.

‘Scuole’ in Venice are brotherhoods and their premises. Founded in the thirteenth century, that of San Marco is one of the six Scuole Grandi, the oldest and most influential. They unite religious inspiration with a lay commitment to mutual aid and welfare; embryo of the social state.

The statue of Charity watches over and cautions from the arch over the threshold. It is the manifesto of a vocation that continues in the contemporary forms of Public Health.

The Azienda Ulss 12 Veneziana encouraged the restoration of the rooms in the Scuola Grande di San Marco, reopening them to the public, and the relaunching of the hospital among the cloisters of the Dominican convent, reorganising the wards and restructuring the hospital complex. The most convincing sign of this can be seen in the refurbished Padiglione Jona.

The history of the Scuola is the basis of the project, and is declared by the ethical tension, the solemnity of the colonnaded vestibule, the immense Sala Capitolare, under the proud coats of arms inlaid in gold and in the blue of the ceiling, with the altar by Sansovino and the altarpiece by Palma Giovane; the Museum of Surgical Instruments, its train of suffering, its discoveries, its conquests; the archive of documents from the early Venetian hospitals dating from 1190 and the library, treasures thrown open by digitalisation; Titian, designer of the anatomical tables, Donato and Varotari, directors of colossal canvases, the Miracle at Cana and the Crucifixion.

The story of the life of St Mark painted for the Sala dell’Albergo by the Bellini, Palma Vecchio, Paris Bordone and Tintoretto, father and son, is now in the Brera and the Gallerie dell’Accademia di Venezia. The whole is so evocative that its power survives even in the photographic copies, positioned in the places of the originals with the recovery of the Scuola.