An exhibition celebrates the trattoria Da Romano, its collection of over 400 works of art and its formidable series of Golden Books. 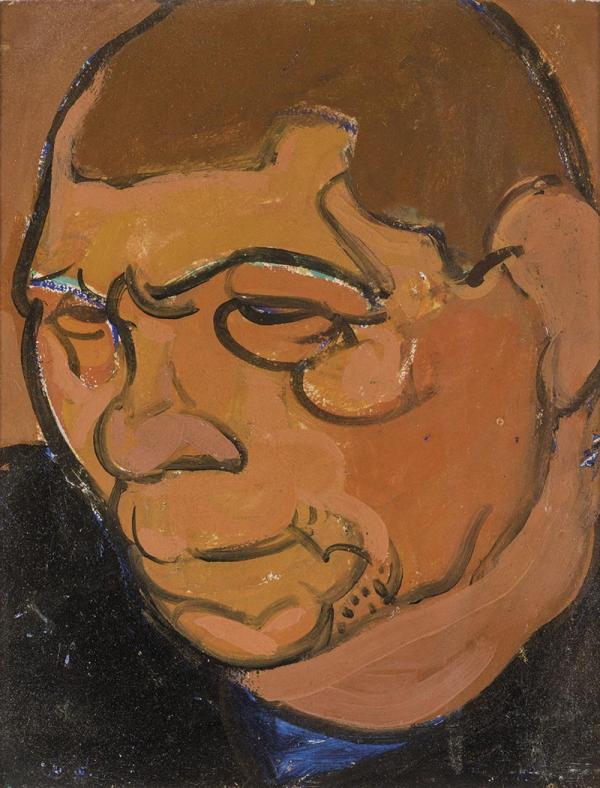 It was very fashionable in the twentieth century for restaurants to have an album in which to collect the signatures of illustrious customers, important guests and celebrities who came to dine at their tables. These Libri d'Oro, or ‘golden books, as they were called, were offered to guests who would leave their signature and often also a greeting, a comment on thecuisine, the service or the quality of the place.

We believe that Romano's osteria in Burano would not have adopted such a custom had it not been for a guest accustomed to the worldliness (of this kind, at least) of the Milanese world: the painter, illustrator and reporter Mario Vellani Marchi. Having arrived in Burano in the mid-1920s and immediately fallen in love with the island and its lagoon, Vellani became a regular and passionate visitor. Here he also discovered the trattoria Da Romano and never left it; he christened it "Tre Stelle da Romano" and was responsible for the unmistakable colour combination of red and green that has always marked the restaurant's image. 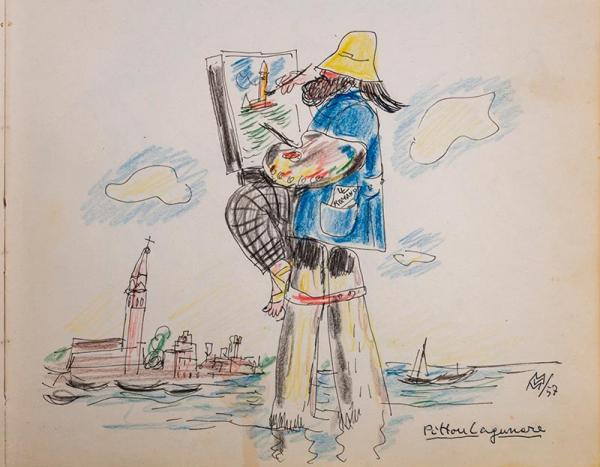 While the locals continued to frequent Romano's tables, playing endless games of cards and quenching their thirst with ombre of red and white wine, Vellani's friends – writers such as Bacchelli and Pirandello, Comisso and Palazzeschi, Campanile and Stuparich; painters such as de Pisis, Dalla Zorza, Casorati, Semeghini, Tallone and Bucci – spread the fame of Romano's cuisine, and Orio Vergani reported on it with repeated enthusiasm in splendid articles in the Corriere della Sera.

It was Vellani Marchi himself who started the Libri d'Oro at the trattoria Da Romano, and these were immediately renamed Diurnali in reference to the Acta Diurna, ancient Rome’s very own ‘daily gazette’. 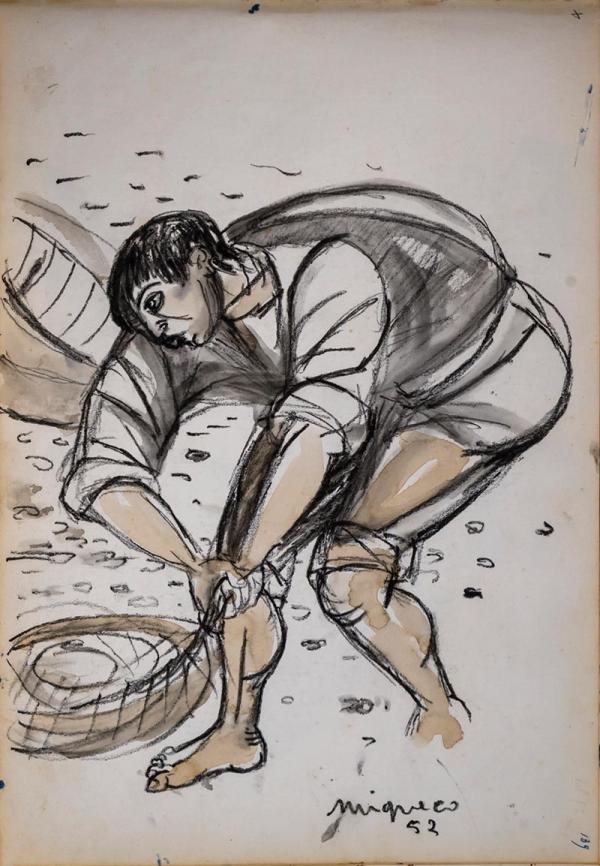 The first was started in August 1934 and the tradition continues to this day: there are 26 volumes and over 6500 pages. But if anyone were thinking of a sort of list of names and surnames and some scattered greetings or comments, they would be greatly mistaken: the Diurnali are very different and much more. There is in fact a double level of interpretation we need to apply with these volumes; first of all, there are the materials (signatures, dedications, drawings) added by Romano's regular visitors, a handful of perhaps twenty or so regulars organised

and coordinated by Mario Vellani Marchi, among whom a very intense familiarity is established, and a shared repertoire of recognisable and recurring words and images is spontaneously created. The second level comprises all the other signatories, occasional patrons of the restaurant: illustrators, poets and, in all cases, unstinting admirers of Romano and his restaurant. There is no shortage of Venetians, of course, who see Burano as an out-of-town excursion or who celebrate happy occasions at Romano's. 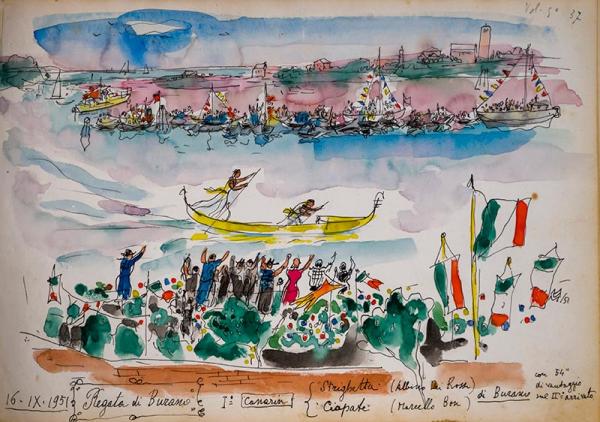 Entries that recur frequently in the Diurnali are the colourful and ingenious ones celebrating the glories of regattas. The numerous plates by Vellani Marchi dedicated to regattas always give information about the event (name of the race, date, winner and placings), emphatically underlining the fact that most, if not all, of the regattas were won by competitors from Burano.

The Diurnali are the most precious documentation of what life was and how it developed on the island and how the trattoria Da Romano represented it physically, like a large mosaic or a socio-anthropological reportage lasting decades.Leafing through the pages of the Diurnali we can easily enter the enchanted universe of an extraordinary cultural adventure that continues, mutatis mutandis, to this day. 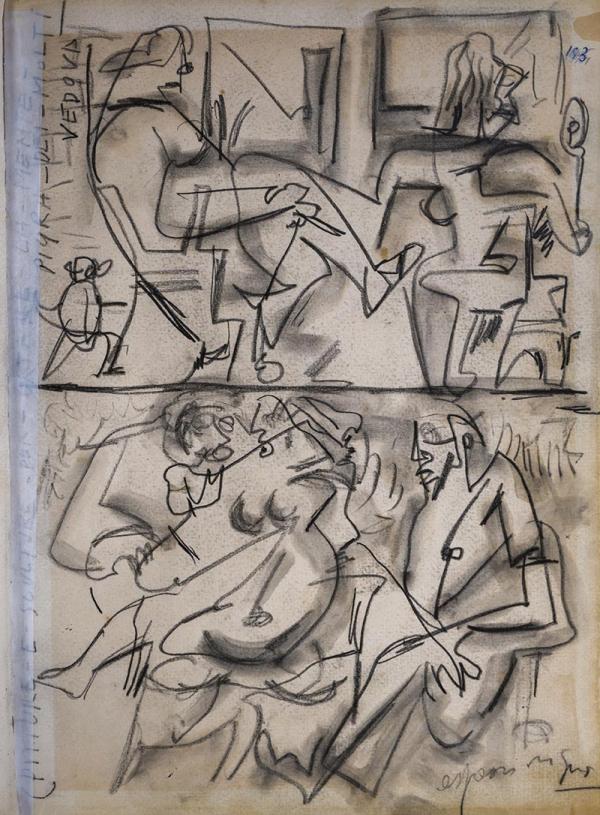 In short, the magic of this place has always consisted in this: it has always appealed to all classes, as required indeed above all by the locals, in which everyone found their own space: the local patrons, who played cards until late in the evening (until so late, in fact, that the proprietors would have to push them home); the outsiders (including Venetians) who ate and still eat their lavish and refined meals from the much celebrated kitchen; finally, the protected area for artists, with a table equipped with a drawer full of drawing and painting materials, from which the most attentive would observe and often portray the varied universe of the patrons.

Dozens of drawings and watercolours – by Vellani Marchi to Consadori, Bucci to Dalla Zorza, Novello to De Pisis – bear witness, in the pages of the Diurnali, to fishermen, market vendors, vegetable gardeners, boatmen employed in the various boatyards and lacemakers at work. Finally, amidst the signatures and appreciations for the quality of the cuisine, something else sometimes emerges, a secret alchemy that puts strokes of genius and small or great masterpieces into circulation (and on paper): Kokoschka, Rothko, Vignelli, Bianconi, Vedova, Mirò, Martini, Guttuso, Cassinari, Migneco, Levi, Le Corbusier, De Chirico, Birolli, Campigli, Viani, Capogrossi and many others. 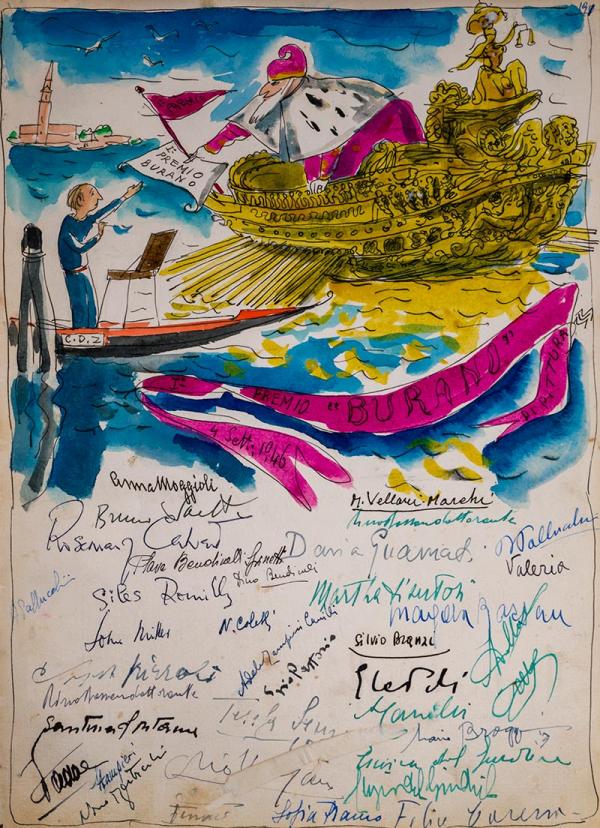 Leafing through the pages of Romano's Diurnali, one can catch the scent of a long season of art, containing the subtle irony, the genius of the gaze that becomes, in moments of grace, a true vision of the world, a paean to a lifestyle that reaches our days, making us both participants and envious of this extraordinary adventure that, fortunately for us, still continues and is renewed. 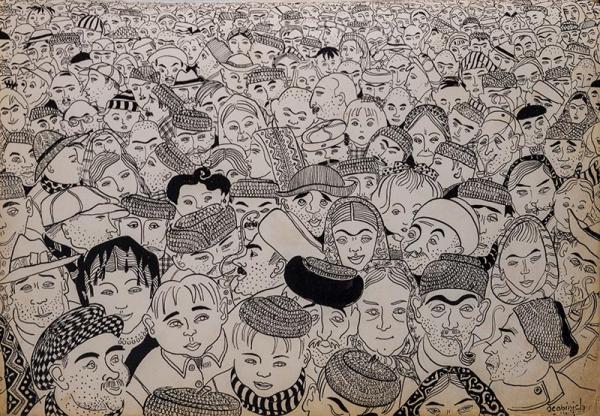