The Rehabilitation of Time

The works of Elisabetta Di Maggio and Giovanni Anselmo, exhibited in two solo exhibitions at the Querini during the Biennale, measure themselves against the Venetian foundation’s spaces

At first glance the geometrical compactness of Giovanni Anselmo’s blocks, precisely inserted in the space, and the rampant proliferation of Elisabetta Di Maggio’s vibratile cuts could not seem more different.
During the period of the Art Biennale they are sharing the rooms of the Fondazione Querini Stampalia in 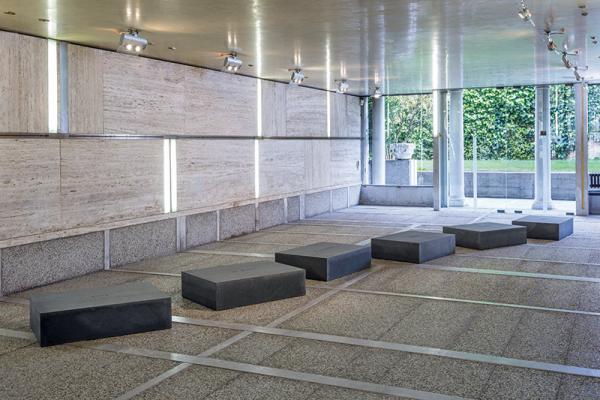 Venice and the same sense of time: geological for Anselmo, trasformative for Di Maggio, but equally distant from the always more frenetic and voracious time of production and consumption. Time that still has a human value.

Giovanni Anselmo’s bare volumes confront the rigour of the exhibition area conceived by Carlo Scarpa. They are stones of a celestial ford: climbing them – one reads, one word at a time on each one – ‘le stelle si avvicinano di una spanna in più’ (the stars approach each other  by another span). 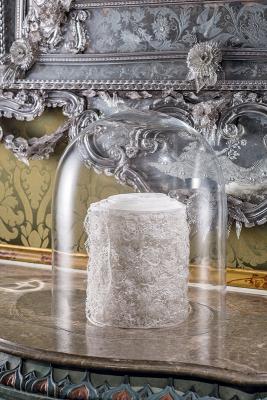 Elisabetta Di Maggio, in the Querini house museum, wants to stay with the bustle of changing, uncircumscribable nature. She establishes creative competition or collaboration with it.  The

works germinate, following the slow time  of the growth of plants. ‘Time itself is the material of my work’. The artist cuts out immense and miniscule designs with a scalpel on paper, on gauze steeped in liquid porcelain or again on leaves.She becomes a parasite, like a woodworm, the insect that embroiders magnificent designs on the vegetable surfaces as it devours them. She tests the biologist Clinton Richard Dawkins’s caution: ‘Nature is not cruel, only pitilessly indifferent’.

Anselmo perceives the impalpable forces that hold the cosmos in balance: gravity, conveyed and held energy, magnetism. ‘The invisible is the visible that can’t be seen’, she writes, and gives the assertion the evidence of a geometrical postulate, cutting a parallelepiped flush with the ‘vi’ of ‘visibile’. The word, incised into the granite, presupposes the solid certainty that its prefix ‘in’ has been removed and is to be found, reasonably, in some place. 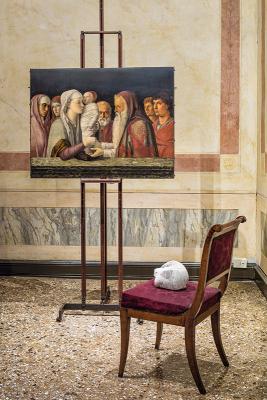 Di Maggio concentrates on the precariousness of things, including the human condition. They may be swept away, but in this vulnerability they enclose an infinite grace. The leaves, reduced to solely veins, seem struck by a disease and reveal beautiful forms. A mathematics of the universe we have, this certainly, before our eyes, and yet, ephemeral and rarefied as it is, we do not notice it. ‘Reality is full of almost transparent nature’. It is a question of giving visibility to that which, distracted and inured, we are no longer able to see. Or do not want to.

It may be difficult to accept the intrusion of the ivy that infests the museum’s portego. It suggests an idea of mixing, an end, the start of a new world, not necessarily awaited with desire.

But the natural and artificial wefts that fascinate Elisabetta Di Maggio, from the synapses of the brain to the lines of the Underground, from roots and branches to the grid of a city map,also speak of the inexorable fecundity of life, which imposes itself everywhere.

That meticulous manual work of hers is a sacred experience of meditation, an exercise of ethical and political awareness in the general torpor.

Elisabetta Di Maggio has trained every gesture to this ‘way of being in existence’. In the rehabilitation of time, in taking all the time necessary,

there is a chance of harmonising with the natural rhythm and leaving a sign, even if only the unpredictable flight of a butterfly.