The music factory in Venice

The Benedetto Marcello Conservatory is an extraordinary ‘sound factory’ with eighteenth-century roots, where tradition combines with experimentation

Franco Rossi, director of the Benedetto Marcello Music Conservatory of Venice for less than a year and a half, speaks with the facts. And the facts show the vitality of an institution aware of its great and fertile past, that also now, in the ‘new’, cannot do without the city and its history.

Benedetto Marcello is Venetian music tradition, Palazzo Pisani in Santo Stefano is the sensational premises of a ‘sound factory’ with eighteenth-century roots, the new is teaching that is authoritative by experience and enterprising in experimentation, it is the search for new territories – from the frontiers of jazz to electronics and early music – it is a weft of exchanges with Venice’s variegated cultural community and more. Thanks to the willingness of generous teachers, the Venice Conservatory is one of the few in Italy to offer two piano masters courses.

Eighty-seven teachers, 570 pupils: Italians from Veneto and beyond, from all over Europe, Russia including the former Soviet republics, the US, Central America, Venezuela, 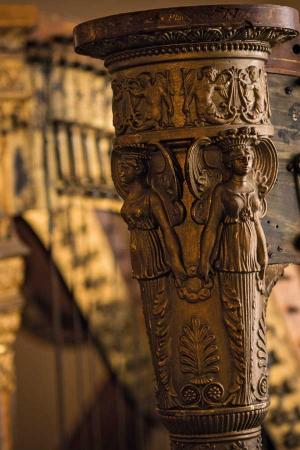 The Friends of the Conservatory support it with a busy programme of conferences, concert lessons and a prize for violin pupils. Supporting this and many activities is a library of about 50,000 manuscript and printed books, probably the most important musical holding in the world, and a prestigious collection of early musical instruments, on display and visible to the public.

‘Endurance and passion’, this is the stern warning that the two statues at the threshold of Palazzo Pisani seem to proclaim. They represent the same figure, a young and a mature Hercules, taking on the first and the last of his legendary twelve labours. The original owners thought that the tenacity of the hero should be sufficient to remind them that a household, no matter how powerful – like an institution, a country – prospers only by industrious faith in the fragile beauty received.

The Benedetto Marcello Conservatory has a collection of early instruments and relics. An eighteenth-century viola d’amore stands out, attributed to Santo Serafin – workshop in Venice, roots in Udine, where he perhaps learnt the trade from the luthier Goffriller – along with a bust of Verdi, the baton and dais from Wagner’s last concert and one of his unmistakable berets.

The documents in the rich historical library include the scores of Anna Maria ‘dal Violin’, a pupil of Vivaldi at the Istituto della Pietà, another of the many places of music in eighteenth-century Venice with its school for orphanage girls, the ‘chorus daughters’. 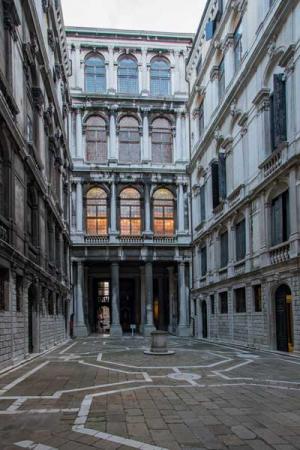 The extent to which the history of Venice has also been made by humble and powerful ‘foresti’ – outsiders, foreigners – is evident in the Conservatory building: Palazzo Pisani is also a private palace between Campo Santo Stefano and the Grand Canal, the urban counterpart to the Brenta Riviera Versailles, the villa that the family, probably Tuscan but in Venice at least from the fourteenth century, owned at Stra.

The Pisani home was expanded with bold extensions, completed between the seventeenth and eighteenth centuries, possibly by Frigimelica of Padua, and inordinate costs, turning it into a colossal complex with a very tall facade and two long courtyards, connected by two aerial loggias.

Inside it is a triumph of stuccoes and paintings: Guarana, Domenico Tiepolo, Pittoni. The gigantic triple fanò, the light from the galley of an Andrea Pisani Capitano Generale da Mar, dominates the atrium.

The fall of the Republic with Napoleon in 1797 and the financial ruin of the Pisani brought about the division of the property, until the palazzo was bought by the city council at the end of the nineteenth century.
Modern frescoes by Vittorio Bressanin colour the ceiling of the ballroom, which became the Conservatory’s concert hall.